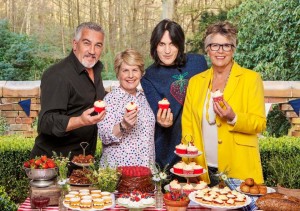 Two baking shows are about to begin new series’ at the end of this month. Channel 4 will launch the Great British Bake Off after buying it from the BBC, and the BBC have launched rival cooking show The Big Family Cooking Showdown. It will be interesting to see which show gains the most viewers, as the original series that has moved to Channel 4 still has Paul Hollywood as a judge, whilst Mary Berry appears on neither. Other presenters and judges include Noel Fielding, Sandi Toksvig, Nadia Hussain, Zoe Ball, Rosemary Shrager and Giorgio Locatelli. I’ll be watching both to see which I prefer, and to see if its the same without previous presenters Sue Perkins and Mel Giedroyc.

At Pimlico we let out our brilliant auditorium, roof terrace and lots of other spaces for events that require catering services. We have kitchens suitable for catering so you can host parties, weddings etc.

@schoolsplus
So many at home options for staying fit at the moment! We love this simple one from @karen_hauer 😀 https://t.co/3h3ikXjSS9

@_ukactive
RT @_ukactive: As news about the #COVID19 outbreak continues to dominate the headlines and millions of people are being asked to self-quara…