As Schools Plus welcomes it’s winter cricketers for indoor nets training I decided to do some research on the sport, one of the few I still play and enjoy each summer. It then got me to thinking about how the sport never really made it state-side! If you had to guess which country hosted the first international cricket match, you’d likely answer with a logical level of certainty that it was England. However, history records that the modern world’s first international sporting event was a cricket match between the USA and Canada in 1844, predating the modern Olympic games. Even though cricket holds comes second only to football as most popular sport in the world, Americans just don’t really play that much. Odd when you think how much American sport is so statistically based and analysed, surely cricket would hit that sweet spot?
Maybe it’s because cricket isn’t thought of as an American sport. Cricket was first played in England back in the 16th century. The British Empire that grew led to cricket being played overseas and by the mid-19th century the first international matches were being played out. Today, cricket is most popular in Australia, England, Pakistan, India and South Africa.
We English are on the whole proud of our game just as Americans are proud that they created basketball or baseball. Most Americans are deeply involved with the sports they birthed, but they don’t heavily participate in international team sports like soccer, rugby and cricket. International team sports create more varied competition and the Americans would have to work that much harder to work their way to the top to remain a world power; and if they can’t rule it then their not really interested.
Oddly though, cricket was a fairly popular sport in America in the mid-19th century, but the introduction of baseball came at the expense of cricket. Marketing played a major role. After the Civil War, nationalism exploded along with a new sense of an American national identity and so things that were so very British, like cricket, were binned in favour something they created themselves.
I also think that cricket’s rules are extremely different than baseball’s and Americans don’t want to spend their time and effort learning how to learn them. Different terminology such as “bowler” instead of “pitcher” and “wicket keeper” instead of “catcher” throws them off and they are unwilling to accept it. Because of a 360 degree field with the all the action happening far off in the middle means they are too far from the action. Even President Obama admitted he was clueless about cricket following a meeting with former PM David Cameron. Obama told a reporter, “He’s going to teach me cricket because I don’t understand what’s going on with that.”
Another oddity for our American cousins is that some cricket matches can last for days. It seems that Americans just get bored easily. In soccer, teams score too few points for Americans to stay interested and in cricket it seems, teams score too many. One thing that may have captured their enthusiasm could be Twenty20 cricket. Twenty20, or T20, cricket is the fastest and most action packed form of the game. A match typically lasts around three hours. In T20, each team has a single inning, which lasts between 75 and 90 minutes. In this timespan, each team bats for a maximum of 20 overs (120 balls) and so batsmen take more risks, which in turn creates more action. 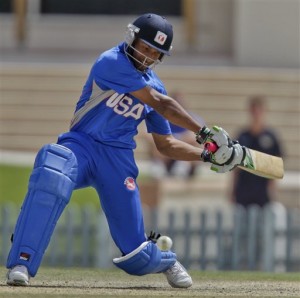 Despite most American not even being aware of cricket, in the USA as of 2015, there were more than 50 leagues across the United States with 1,100 registered clubs and around 35,000 active players. There is a USA cricket governing body for the sport, the United States of America Cricket Association (USACA). Once juniors get interested in the sport the hope is that adults will follow suit. In all honesty though I think the ship has sailed on cricket being anything other than a niche sport in the USA. There just isn’t capacity for another big sport that could pry people away from the big team sports of: Basketball, American Football, NASCAR and Baseball. What we call football (soccer in the USA) has had millions invested and is still a minor sport compared to the big 5.

So……. for those of you who do like their bat to be flat, their balls to be red and their outfits to be all white, why not book one of our cricket net equipped sports halls to keep your eyes in ready for the cricket season!

@SportInspired
RT @SportInspired: Happy #RandomActsofKindnessDay! Being kind to one another is the backbone of our organization. Our values are to have fu…

@schoolsplus
Our School of the Day is Mossbourne Community Academy, found in Hackney, London! This venue has some truly great fa… https://t.co/DqLpsX2t6l

@schoolsplus
We hope you guys have a great half-term camp! https://t.co/5K13GUMxTm